The recent turmoil in the European Union has rattled global stock markets. Greece’s massive debt and dwindling cash reserves threaten to destabilize Europe and potentially all economies around the world. Spain and Italy are hanging on by a thread and will require hundreds of billions in bailouts in order to survive. Even that might not be enough.

Meanwhile in comic book land things have been very good. In fact some observers speculate that Doug Schmell’s recent decision to sell his entire Marvel Silver Age collection (expected to fetch over $3 million) is a sign that we’re near a market top.

On August 1st, 2011, using the latest auction data available at the time, a comic collector would have had to fork over about $336,600 to buy all the comics in our Marvel Comic Composite.  To compare the results with the stock market indices I’ve chosen, I assumed the comic collector instead used the $336,600 to buy either the S&P 500 Index or the MSCI All Country World Index. The results are below: 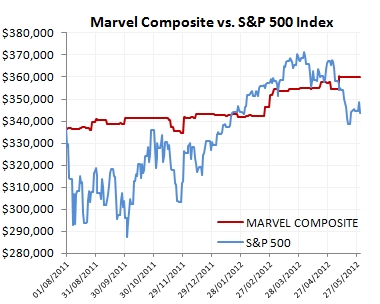 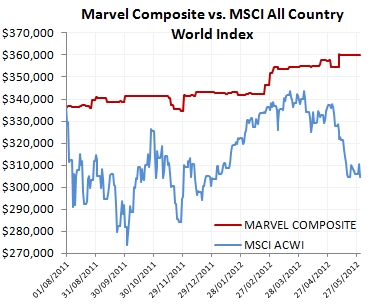 Right after August 1st, 2011, the European situation escalated. You can see both stock market indices fell sharply. Then markets rallied on renewed optimism, corrected, rose into March, 2012, and have recently corrected again as the situation in Spain and Italy continues to deteriorate. It has been very volatile, to say the least. In comparison, demand for key Silver Age books remains strong, especially for Avengers #1. High grade Bronze Age titles, which have suffered a 50% decline since 2009, have stabilized.

Clearly, owning the Marvel Composite has been the better alternative. As of May 30th, 2012, the Marvel Composite was worth approximately $360,000. This represents a nice 7% increase over its August 1st, 2011 starting value of $336,600. If the comic collector had decided instead to invest in the US market, his portfolio would have increased by 2%. The worst alternative was the World Index, losing 9.5% over the period.

By no means am I suggesting that comics are a better investment than stocks or any other investment alternative. However, this quick comparison reveals a couple of interesting things: 1) perhaps comics deserve a bit more respect as an investment alternative and 2) if you’re going to sell $3 million worth of Marvel comic books now might not be a bad time to do it. The contrarian in me says that it might not be a bad time to swap some of your comics for underperforming stocks!