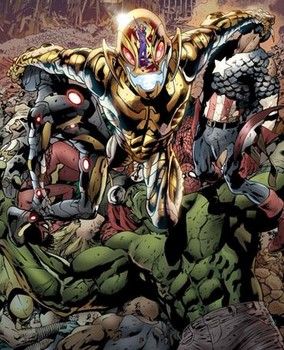 DATELINE: NEW YORK – The next big event for the Marvel Universe is AGE OF ULTRON. Writer BRIAN MICHAEL BENDIS says the effects of AofU will be widespread and that the ending –in his words– will be “unguessable”. Your intrepid reporter has combed through uncountable dumpsters, questioned hundreds of sources, and even resorted to sexual favors for key Marvel staff members. (The favor being, that I would NOT have sex with them). Through these efforts I have gotten into Bendis’ head. I am absolutely sure that Mr. Unguessable’s ending is one of these:

2.) PUNISHER goes for a walk on the beach. Looks up and sees a half-buried Statue of Liberty in the sand. He gets pissed. Starts yelling a lot. Shoots all the apes.

3.) THING starts pulling parts of his body off. On the ground he spells out “GOODBYE” in orange rocks.

5.) CYCLOPS, BEAST, ICEMAN, and JEAN GREY sit in a jail cell waiting to be tried for violating the Good Samaritan Law.

7.) JARVIS wakes up in bed with Suzanne Pleshette.

8.) Everything that happened in every THUNDERBOLTS story took place in the imagination of an autistic child.

9.) SPIDER-MAN starts a club where people beat the daylights out of each other and blow up buildings. In actuality, Spidey has two different personalities battling each other in his mind! (Nah! Nobody would ever believe THAT)

10.) The AVENGERS are enjoying a meal together in the shawarma joint.  THE STRANGER is sitting at the counter and staring at TONY STARK. BRUCE BANNER tells CAPTAIN AMERICA that he needs to “remember the good times”. The STRANGER gets up and goes to the men’s room. SHE-HULK walks in. TONY looks up. Cut to Black Screen and Silence.