The epic crossover event of the summer for DC Comics was “Death of the Family”.  The story involved all of the (immediate) members of the “Bat-Family” as they were hunted and tormented by the demented Joker, who has returned to terrorize Gotham City. 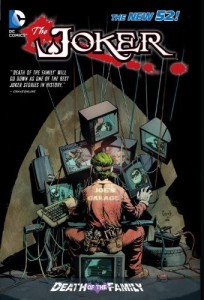 The Death of the Family storyline crossed over into Batman, Detective Comics, Batman and Robin, Batgirl, Nightwing, Catwoman, Teen Titans, Suicide Squad and Red Hood and the Outlaws.  Each title had their star “Bat-Characters” match wits against the evil and diabolical Joker, whose ultimate plan was to get rid of Batman’s allies, who in Joker’s mind were weakening the Dark Knight and keeping him from being the hero that Gotham (and the Joker) desperately needs.

If you missed out on these issues this summer, you are in luck.  Just in time for the holidays, DC is releasing the collected editions of the Death of the Family.  But there is one small problem… you may have to buy it multiple times to get the whole story.

I decided to wait, and not buy Death of the Family when it came out this summer as single issues.  I figured DC would come out with a large compendium or omnibus.  Several weeks ago a hard cover collection of Death of the Family did come out, and I grabbed it on that first Wednesday.  I checked out the table of contents and all the titles were there.  Detective Comics, Batgirl, so on and so on.

I figured the collection was complete, until I started reading it.  There were pieces missing to the book.  The attack on G.C.P.D. was mentioned, but never shown.  It’s mentioned that Alfred was taken by the Joker… but that part is missing too.  I started to think I was going crazy. 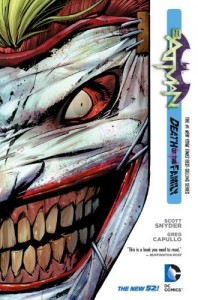 Then the first individual trade came out for Death of the Family.  Batman.  Finally… the missing pieces were restored.  I was finally able to read the story in completion (sort of).  But… not only did I get new content, I had duplicate content as well.  The finale was reprinted in the trade.  Ok, it made sense it is Batman’s book.

But it’s not just the Batman trade that reprints the issues from the complete collection, they all do.  Batman and Robin, Nightwing, Batgirl… they all have content that will be duplicated if you buy everything.

This kind of irks me. 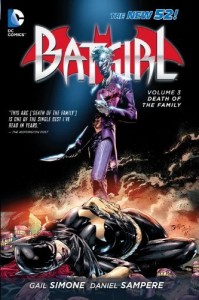 I would like to have the complete story.  All of it’s parts and pieces.  But to do that I would have to buy every single trade for every single title.  Which they aren’t selling at a discounted price.  It is still the same old cover price, even though you would be buying the same content over and over again.  It feels like a rip-off to me.

If I knew this was going to happen, I probably would have just stuck to the single issues right from the start.  Instead of investing a bunch of cash into a story, that isn’t complete.  I guess I’ll have to search to back issue bins so I can complete the collection of Death of the Family.