Anthony Falcone touched on this in his last column, and it is a topic I’ve been thinking about more and more lately – The return of Peter Parker.

In case you were in a coma for an extended period of time, or on the dark side of the moon… basically Otto Octavius (Doctor Octopus) swapped brains with Spider-Man (aka Peter Parker) and now Doc Ock is a Superior Spider-Man, and Peter Parker was trapped inside Doc’s dying body and essentially our Friendly Neighbourhood Spider-Man is no more.  But that’s in the past, so let’s get on with the real issue at hand… Peter Parker’s return.

As Anthony pointed out in his article the new Spider-Man movie is coming out this summer, and “comic book companies are loathe to have a movie out when the main character is so drastically different from their silver-screen counterpart.”  Which makes complete sense.

The whole reason Marvel got into making movies was to market and merchandise their characters.  Comic books are just merchandise and to sell comics to readers, you have to give them something they can identify with.  If you have scores of people running out to the comic book shop to pick up a copy of Spider-Man, and they find a comic featuring a villain in the head of the hero they just saw on the big screen, it won’t make sense to them.  Mostly likely they won’t return to purchase another copy. 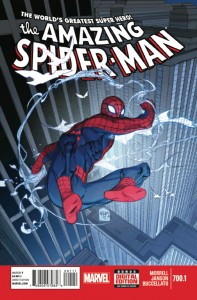 There have been other events that make me think that Peter Parker will be returning “from the dead” soon as well.  December saw the return of Amazing Spider-Man with issue #700.1 (leading up to 700.5 at time of writing).  These Point-One issues have Peter Parker trying to eek out a meager living as a photographer for the Daily Bugle, and trying to take care of his lonely widowed Aunt May… hold on…

That hasn’t happened in the pages of Amazing or Superior for years.  Peter worked for Horizon Labs.  Aunt May got married to J. Jonah Jameson’s father.  Peter has money.  Everybody has been happy.  What’s going on in these Point-One issues?

It doesn’t matter.  These Point-One issues are perfect for the new Spider-Man reader, or someone who hasn’t read the comic since the 80’s.  It’s just a glimpse at what Peter Parker’s life used to be.  I’ve enjoyed these issues because it is just a simple story.  It reminds me a lot of how comics were when I started reading them when I was a kid.  A simple, easy to digest story, that didn’t involve a huge story arc that you have to track down multiple back issues, or wait to read it in graphic novel format.  ASM.1 are stories from a simpler time, that helps keep the title alive.

There was another panel in the pages of Super Spider-Man #19 that makes me think the real Peter Parker will be returning soon.  In this issue Peter (Otto) is trying to remember parts of Peter’s past to help prevent a time-temporal event that will cause the destruction of the space-time continuum.  Otto purged all of Peter’s memories (in a previous issue) and he was straining to remember something from Peter’s past.  While he is doing this, you can see a figure digging himself out of ruble and debris.  Is this Peter Parker?  Will this lead up to his eventual return?

But it is an amazing page of comic artwork.