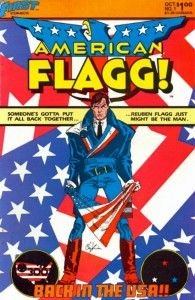 I received a nice email after I posted Undervalued Spotlight #111 last week and the jist of it was ‘how come you pick books that are almost impossible to find’?  First off, I thought I was being fair, I thought that for every Pep Comics #36, Better Comics #1 and Famous Funnies #100 I posted a G. I. Joe #21, Alpha Flight #106 and Iron Man #47! The idea is to be all inclusive, to find little gems and big gems in all the ‘Ages’ and in all price ranges so if I put a few too many tough ones in a row then apologies to all.

One of the eras that I think is rife with undervalued possibilities is the early 1980s. Company’s like First, Eclipse, Warp, Comico, Renegade Press and a slew of others were publishing some pretty innovative stuff. Many of the charters and properties introduced at the time have aged quite well and are ripe for fresh interpretations.

There are some excellent American Flagg summaries available on line so I’ll just fill in the major points. Rueben Flagg became a cop for the Plex Corp. after losing his job as a TV actor. The Plex Corp. is the all encompassing entity hired by the U.S. government (now in self imposed exile on Mars) to run all its affairs back in the U.S.A. People live in large commercial/residential malls and Plex’s mandate is to keep the peace in the malls and to ward off the gangs and militias that have formed in the hinterlands.

Some of Chaykin’s future visions are eerily accurate. The Soviet Union collapses after an Islamic uprising; Brazil forms a coalition of nations to become a superpower. Chaykin forsees a media saturated society with 24/7 news that reports sensationalism over journalism (he predicted Nancy Grace!). There is a lot to take in, the storytelling is thick and multi layered, you can almost picture Alan Moore and Frank Miller reading this stuff and going, yeah! Frank Miller’s Martha Washington is often sighted as an example of American Flagg’s influence.

Chaykin’s artwork in American Flagg #1 is unique, way ahead if its time. His mix of imagery and text is legendary and the subject of much study. His style influenced so many artists that followed him, the modest Chaykin himself stated “Let’s face it – this is going to sound self flattering, but it was a very influential book in its time. I think it introduced a lot of graphic ideas and concepts for how to do what we do for a living that are being used to this day both by me and the extraordinarily gifted [letterer] Ken Bruzenak. I’m very proud of this work…” 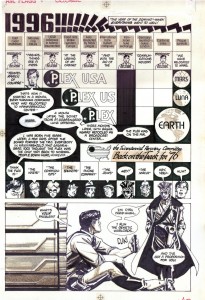 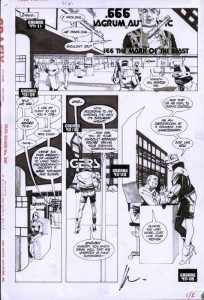 Only 18 copies have been graded by CGC as of this post and 5 are 9.8s. Graded 9.8 copies get around $30 on the market but you don’t have to go through the expense of picking up a graded copy, find yourself a couple of really tight copies raw in the $5 range and then patiently wait for this book to quietly get harder and harder to find.

American Flagg #1 is one of those comics that collectors my age and older easily dismiss. I think that this book has a bright future as a collectible. The print run is modest and the material deserves notice. Perhaps the new generation of collectors is ushering in a new age of discovery, mining the not too distant past for neglected and overlooked gems!

The 41st edition of the Overstreet Price Guide shows $4 as the price for a 9.2 grade.